Celebrated TV & Film composer Martin Phipps talks us through the joys of his career, how it started and developed in the age of Netflix, plus his love for East-London.

Martin’s new studio is something to behold, with a huge artwork Martin commissioned of Olivia Coleman as the Queen side eyeing anyone who visits. There is a beautiful piano and collection of instruments sat around the desk, as well as digital equipment now used to score TV & Films. 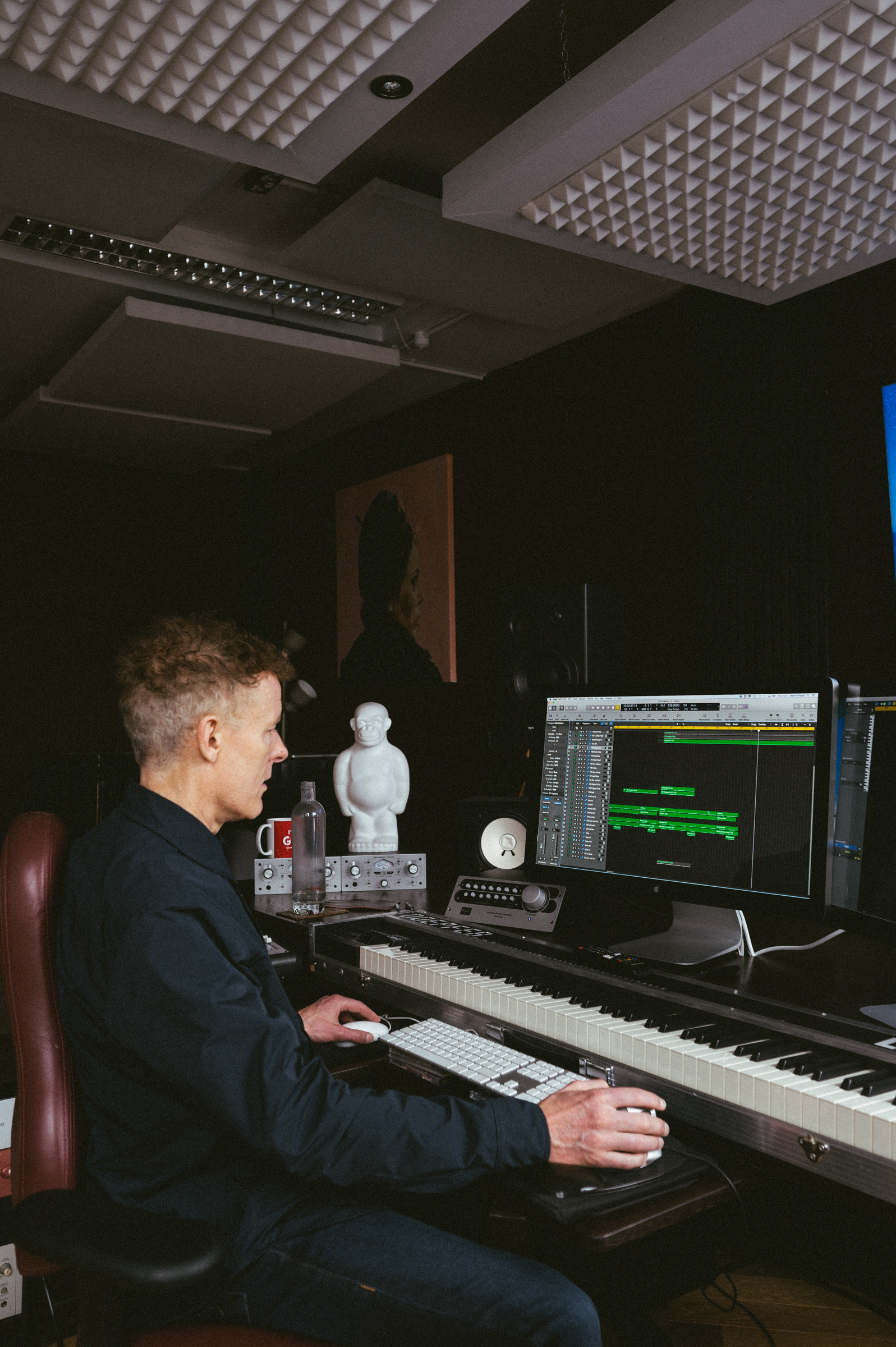 Martin has grown up around music most his life: “I came from a really musical family, so it wasn’t a bold move for me. My mum worked with Benjamin Britten and his partner was Peter Pears. I grew up in Islington and they lived in the house next door.” He always knew he wanted to do music and be in bands, but until he started doing drama at university and discovered his love for creating the music for plays, the road became clear.

“When I realised, it was just fantastic, it just started becoming this other narrative to my interest, an idea beyond your own music. I could also work on my own which suited me well. I quickly realised I wanted to do TV & Film and my partner at the time (now his wife) was a producer, she got something off the ground, a TV series and I did the music for that. I count myself lucky, as people won’t take risks these days when hiring unless they are established artists or have done stuff before. You don’t need to marry them… But my advice would be to stick close to anyone you know making anything, that’s my world. Don’t hang out with musicians, network with people making the things that compliment your skillset, in my case Film & TV, because that is who’s going to give you the job!”

He also recognises how different his industry is now to when he started out: “It was quite a closed world when I started off. The really early days of music technology, where you pretty much had to write everything down when you were scoring films and wrote it on paper. The whole idea of having a music studio set-up with this equipment and producing demos was totally alien. I’m so glad it’s advanced, as writing music on paper was never my strong suit. I’ve got lucky with writing film scores, as it’s quite good if you don’t know too many chords. I’ve always tried to keep it simple and use what I have, in my case some commercial sensibility.”

His career has changed the way he listens to music forever, unable to enjoy classical in his own time, he now turns to 90s house music to relax: “It certainly does kill your ability to listen to music recreationally. I do it all day long and analyse how the songs are pulled together, so when I get out of here I have to listen to podcasts instead. I just listened to the whole of Sapiens on audiobook and would recommend it.”

The celebrated TV & Film composer is well-known in the industry for his work on critically acclaimed Netflix series, The Crown, Peaky Blinders, The Shadow Line, and Black Mirror. He has also been awarded with five Ivor Novello and two BAFTA awards and received multiple Emmy nominations for writing music for many of the most interesting series of recent years. It’s fair to say that he’s one of the most decorated screen composers in the UK. Martin notes the change in scene:

“A lot of the award ceremonies are doing socially-distanced versions. Not quite the same, but it will be interesting to see how the Oscars put on a show. I will be going to the Emmys in September, I’m hoping by then I might be able to travel too.”

We were eager to hear about his work on The Crown and learn more about the process: “No matter what you think of the content and if you have interest in the Windsors, it says so much about what it means to be British and all our history. I think it layers all the slightly fucked up culture of different class and society systems, but with real beautiful humanity, you know. They weave amazing narratives and stories in the drama, it’s hard not to feel it.”

With season five of The Crown resuming this summer and plans to be screened in 2022, you get a real sense of how fast the show is turned around. “It’s fascinating how quickly it’s pulled together. They start shooting in July, finish the following July, then take a year’s break to catch-up writing the show. The next season will start filming this summer and then hopefully be out in November next year.

I was brought on for season 3. After the first 2 seasons they wanted to try something different with the music, which was interesting to me as I thought the music was truly great in the first two seasons but I came to understand what they were trying to do. The creator Peter Morgan wanted a fresh approach to match the relaunched cast, something less orchestral and more personal. The point was to be a little more unusual with the music and try to score it in line with the characters and their emotion. It was daunting taking over, but I feel like I achieved what I set out to do.

It’s just me really on the composer side, but I bring people around for the orchestral recordings at Air Studios in Hampstead. It used to be George Martin’s studio setup in the 60s, it’s an old church. Downton Abbey Road is the best orchestra for this kind of work and for film scoring sessions, they have a brilliant classic symphonic sound.”

He hasn’t moved too far from East London his whole life, being born in Homerton and raised in North London, he now resides near London Fields. “I haven’t moved a mile since I was born and couldn’t imagine moving out of London. Maybe one day but definitely not now. I love crowds and I love life.” When asked what he loved about the area:

“The life here is great, the diversity is important to me, it feels much more dynamic and creative compared to other parts of London. Broadway Market is great, I have friends that come down to see us and they can’t believe how much is going on around here. In terms of places I love to go and hope will still be around post-Covid, I thoroughly recommend Lardo, Brat and the pop-ups in Climpson’s Arch.”

We were interested in finding out why he chose to be part of a community at Netil House. “Being in a multimedia place with different creatives doing different stuff is absolutely important now. My job is so solitary, I’d go mental and I think many people over lockdown have discovered the negative effects of working on their own. It’s hard. I worked at home when my kids were young, but as soon as the opportunity came, it was really good to have the separation between home and work if that’s possible for you. I would definitely testify to that.”

“I’ve learnt that I don’t need to go out as much as I thought I did. I need to chill out a bit more and not worry about spending more time at home. As my work is so solitary, I made a point of making sure I was out several times during the week and the weekends. Sometimes I believe it’s better to let things come to you, rather than trying to make things happen all the time. You’d be surprised if you give people a chance to come to you. Generally a good life lesson, I think.”

We didn’t know where to start with his projects over his lifetime, the list is so great. We were interested in finding out if there was one in particular that stayed with him.

“My tip to anyone reading this, is go and watch The Shadow Line, it’s still my favourite thing I’ve ever done. A small low rent criminal underworld drama by Hugo Blick, who has recently done The Honourable Woman and Black Earth Rising. It’s weird and very heightened and strange, but so interesting and very clever, so check that out.”

Covid has accelerated processes that were already happening as we switched from consuming less film, more TV.  As we enter the age of streaming services, this has naturally shifted Martin’s work.

“Film was already beginning to be affected, it was having its mid budget ground overshadowed by high-end TV. All that kind of intelligent film made for those who should be watching films, was stolen by TV. That just accelerated with the whole streaming platform boom, Netflix has global access and that’s just incredible, they’ve totally transformed them. BBC makes TV for Britain and what’s relevant to us which is important, but the streaming services can do really amazing things.

I spent a long time trying to get into film, having started in TV and got a bit stuck in TV, then it really took off, so I’m quite happy where I am. The most interesting work I get offered is all television.”

Netflix has been credited for having a positive impact on mental health during the pandemic and Martin agreed that they were an unexpected hero throughout. “They’ve positively changed the standard of what we watch.”

When asked if he saw the industry changing shape further in future, Martin mentioned the shift towards gaming. Whilst he’s never got into it himself, he would be interested to see if there was a way to score video games in the same way as film:

“There is huge complexity scoring something around an emotional scene, you can make choices for characters. I wonder if you can do that for characters in a game, as they’re getting a lot more sophisticated, intelligent and show an emotional range. Let’s wait and see.”

We will eagerly await The Crown Season 5 and the project he was working on in situ, SOLOS on Amazon Prime!

If you're looking for a studio to transform into your own space, check our available studios here.

You can also call our Resident Curation team if you're looking for something specific: 020 3095 9724